It's ON! Are you in the Montréal area?  Come out to see a true battle go down this weekend.

What's that saying about "picking on people your own size"?  Georges Laraque is probably 4 times bigger than me, is an adamant proponent of vegan-ism, and has an impressive 13 year NHL career that he finished off with the Montréal Canadiens in the bank.

He is also convinced that he can beat me in a cycling race in Montréal.... Game on. I'm up for the challenge.
Georges and I are going to see who's truly the fastest this Sunday November 16.  We'll be racing from the base of Mont Royal's Camilien Houde climb.  Who do you think will win?  Let us know on Twitter (@Lex_Albrecht and @GeorgesLaraque) using hashtag #LEXvsLARAQUE

I don't know what I've gotten myself into, but I'm determined, and I could use all of the support you can give!  Come share your energy, cheer for your favourite and watch the battle go down - Let us know that you'll be there with an RSVP on Facebook: https://www.facebook.com/pages/Lex-Albrecht/137026036359510?ref=bookmarks

I am proud to represent these fantastic companies.
We're working TOGETHER to make all of this fantastic achievement accomplishing possible!
Click on their logos below to see what's new... 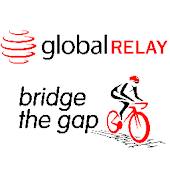